skip to main | skip to sidebar

Posted by Texas Doll Designs at 10:12 AM No comments:

May 2011 - Its been almost a year now since Dorothy Fannin's passing - in honor of her and her barbie sized hat/purse designs - I'm going to offer a free purse with every 5 purchased during this entire month of May - - simple go to the website http://www.texasdolldesigns.com/chicbydorothy.html - purchase 5 sets and I'll send you an additional PURSE free!!

Several of her barbies and kelly designs have been marked down - you can find them on the Etsy store: http://www.etsy.com/shop/texasdolldesigns
Posted by Texas Doll Designs at 10:25 AM No comments:

The new Marie Osmond inventory has been shown and ordered and expected to start arriving in March. Check the website http://www.olivemariedolls.com/ for their arrivals!

Lots and Lots of Strawberry Shortcake dolls have been posted to our Etsy.com site - Vintage dolls and Sleepers, Chris Miller OOAK outfits for SS dolls (some fit other dolls) and about 50 OOAK Customized SS dolls - - all acquired via an estate sale.
http://www.etsy.com/shop/texasdolldesigns

Join us on Facebook: http://www.facebook.com/texasdolldesigns for the latest AND specials!

Posted by Texas Doll Designs at 6:55 AM No comments:

Texas Doll Designs joined ETSY.com for ooak items! I moved all of Dorothy Fannin's OOAK items off ebay and onto this Etsy.com site. Will also be transferring all of my own ooak items - dolls, bracelets, etc. Check out the link for updates!
Posted by Texas Doll Designs at 9:08 PM No comments:

Join us on FACEBOOK For all the latest dolls we've added to our inventory or orders!

Posted by Texas Doll Designs at 8:36 PM No comments:

A Memorial Tribute to Dorothy Fannin

I met her at my first Barbie Convention in Tulsa Oklahoma in 2000 and shortly thereafter became what she called 'her business manager' when I volunteered to help her promote her designs. She would make her adorable hat and purse designs and then send them to me to market for her. I would take pictures of the designs on doll heads and stands, edit and post them to my website page for her as well as ebay and doll messageboards. I took her designs to every doll convention I attended to sell her fashion hats and purses (Barbie Conventions & IFDC). She would often give me a price quote for one of her designs and I would tell her she was underselling herself and I would price it up - so she left that up to me going forward and was always thrilled when one of her designs sold. She told me to sell them however I saw fit becuz (and I quote her) "You could sell the brass balls off a monkey!" LOL Always a great sense of humor.

She is absolutely LOVING all the attention she is getting on this Memorial Day. She did so love the limelight! I will certainly miss her & her (sometimes) demanding ways! She was always quick to tell me I took the pics wrong that I should "try putting the hats on at an angle" or "that one would look better if you put it sideways on the head" or "tip the hat towards the back". She never really grasped how much work went into just taking the enormous pictures of her designs so I would just tell her "ok next time I'll do that!" lol I wasn't about to retake the pictures when whoever buys them can put them on however they want to! When she sent me her bio she said she'd rather not mention the ooak doll contest awards she won becuz they were never that important to her - but as her "manager" I put it in there anyway becuz it's a part of who she was and her accomplishments. She knew I'd do as I thought best for promoting her anyway! ;)

She had us all rolling on the floor with laughter at conventions at her costumes. She loved to play dress-up and if she could add a "shock" flavor to her costumes, she was all about it! She was gutsy and as sharp witted as she was sharp tongued! She was always encouraging to her fellow doll artists and enjoyed buying their designs as much as she gained pleasure when they would buy hers.

I remember at one convention while set up in the Artist Gallery with her hats/purses, Jason Wu stopped by her table and was toying with them meticulously trying to figure out how she did them. So he asked her "how did you make these?" Not one to give away her trade secrets she promptly told him he was welcome to "BUY ONE" to dissect it if he really wanted to know! heehee Of course he didn't - he's a little genious himself so we knew he would have no trouble designing his own! 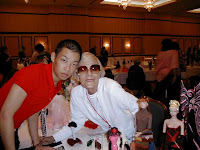 Dorothy had a way about her that I always thought she could gather an army of people to follow her as their leader whenever and wherever she wanted to. We all found it hard to say "no" to Dorothy ... sometimes becuz she wouldn't take "no" for an answer!! LOL :)

She loved her family (children and grandchildren), her dogs (Tootie & ?), her doll friends and doll groups. She sent me pictures of her grandchildren at every holiday occassion - she so loved watching them grow up. She loved doing her holiday doll diaramas and always sent them over to me to edit and post for her. I'll continue to share those in the coming years during the holidays as she would just LOVE that!

Her one wish (that she wrote to me over and over in emails over the past few months) was to hold out to see Vanessa get married July 10th - I'm so sorry that she didn't physically make it that long but we all know she'll be there watching (or should I say directing?!) from a higher seat!

Some of the last things she mailed me were her molded hair designed barbies. She said "do you think anybody would want any of these?" I told her we wouldn't know til we tried and posted them out for sale. She'd be very happy to know that she's sold several of those since she passed. She also sent me a bag full of hats she said she found in her closet she had forgotten about. She made them using recycled dryer lint - shaped them, painted and decorated them. So I'll be matching those up with some single purses of hers here and posting those up for sale soon also. She wanted me to continue selling and marketing her fashions for as long as they last. That was one of her last requests to me - to carry on with doing what I was doing. She gave me guardianship to do whatever I saw fit with them - sell them, re-design them, donate them or whatever.

Thank you Dorothy for your trust and your love & friendship you showed to me with your ever positive encouragement to me personally. I will miss you for a while - but I know I will see you again! ~E~ 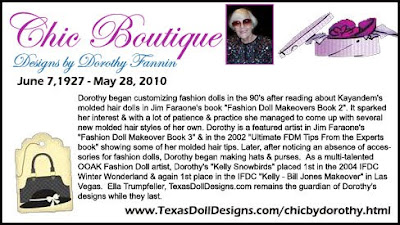 She left me as guardian of her designs and they are listed in my ebay store:
CHIC BY DOROTHY 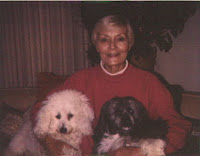 She loved her dogs!

She loved her flowers and gardening. 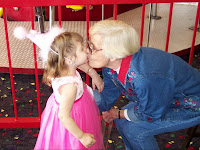 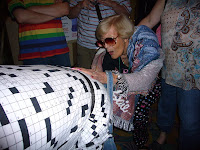 She loved her doll friends! 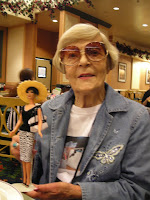 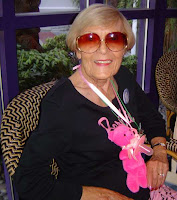 She loved Barbie & playing with the "travel" dolls 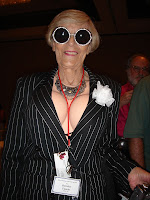 She was always game for dressup!
Posted by Texas Doll Designs at 9:26 AM 1 comment:

Posted by Texas Doll Designs at 9:03 PM No comments: